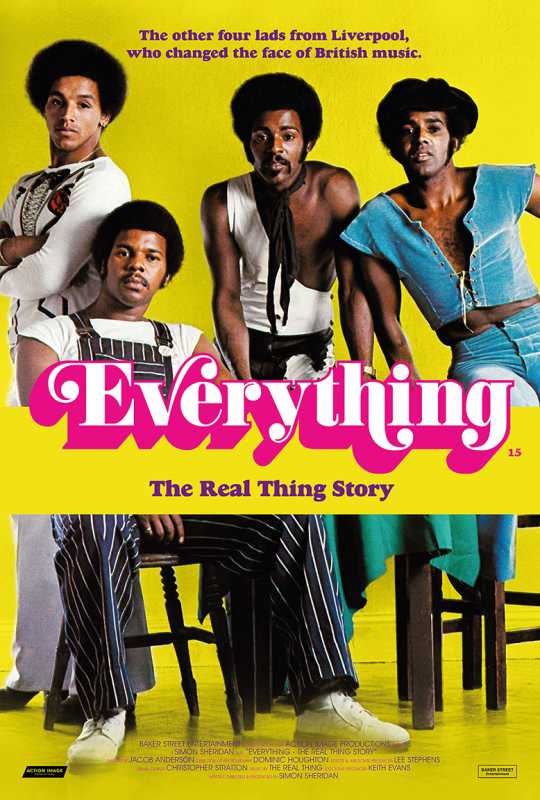 Everything – The Real Thing Story

Dubbed 'the black Beatles' by the British tabloids, the 'other' four lads from Liverpool recount their incredible story from the tough streets of Toxteth to the bright lights of New York – a journey of international stardom as Britain's pioneering million-selling soul and funk band. Against a backdrop of prejudice and political turmoil in the 1970s, The Real Thing were the first all-black British band to hit #1 in the UK pop charts, with the universally-loved 'You To Me Are Everything'. Other hits like 'Can't Get By Without You', 'You'll Never Know What You're Missing' and 'Can You Feel the Force' set dance-floors alight, but their proudest moment was composing the rousing 'Children of the Ghetto' – the first ever protest song to address the plight of black immigrants in Britain. The group's massive success has been tempered with racism, drug addiction and suicide but, for the very first time, original band members Eddy Amoo, Chris Amoo and Dave Smith reveal the brutally honest truth …
Director: Simon Sheridan
Running time: 1h 34min
Genre: Documentary,Music
Release date: 24 January 2020 (UK)
Cast: Jacob Anderson, Eddie Amoo, Chris Amoo, Dave Smith, Billy Ocean, Kim Wilde
TRAILER SERVER 1