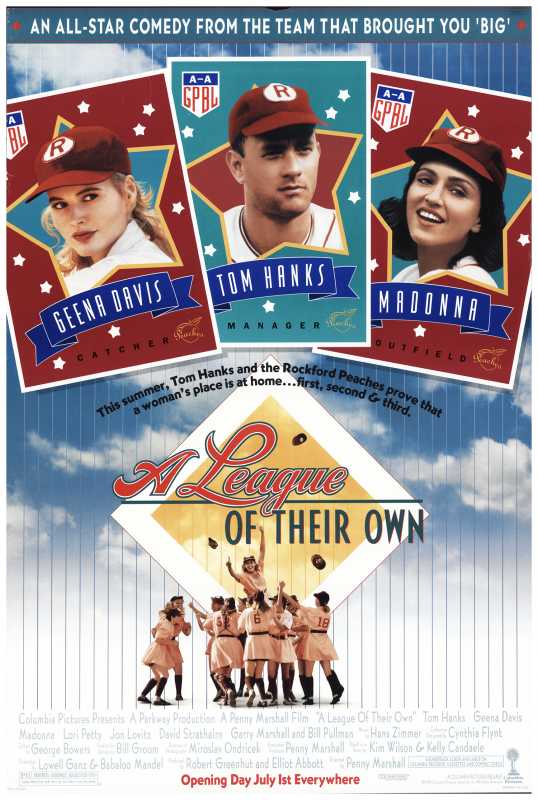 A League of Their Own

During World War II when all the men are fighting the war, most of the jobs that were left vacant because of their absence were filled in by women. The owners of the baseball teams, not wanting baseball to be dormant indefinitely, decide to form teams with women. So scouts are sent all over the country to find women players. One of the scouts, passes through Oregon and finds a woman named Dottie Hinson, who is incredible. He approaches her and asks her to try out but she's not interested. However, her sister, Kit who wants to get out of Oregon, offers to go. But he agrees only if she can get her sister to go. When they try out, they're chosen and are on the same team. Jimmy Dugan, a former player, who's now a drunk, is the team manager. But he doesn't feel as if it's a real job so he drinks and is not exactly doing his job. So Dottie steps up. After a few months when it appears the girls are not garnering any attention, the league is facing closure till Dottie does something that …
Director: Penny Marshall
Running time: 2h 8min
Genre: Comedy,Drama,Family,Sport
Release date: 6 November 1992 (Sweden)
Cast: Tom Hanks, Geena Davis, Lori Petty, Madonna, Rosie O'Donnell, Megan Cavanagh
TRAILER SERVER 1